Wanna Know What I've Been Doing? 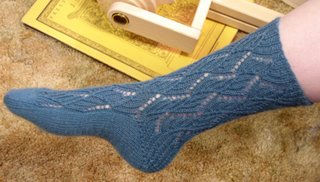 To start off with, this is the sock complete for KAH. Which means that I completed one goal already for Socktoberfest! This is the one and possibly only time where a single sock is a project complete. That's because we only need one sock for a display model in the shop. I really love these socks, even though I did name them the Interminable Socks. I think it was more of a mental block than anything. They are made from Opal Solids and they blocked up beautifully. They are so soft and so pretty, I was just amazed when they were all blocked out. The pattern is from Sensational Knitted Socks and is called Ribbed Lace (their picture does not do it justice!). I love them so much that I want this one as payment and eventually I will knit a mate to it. I have all of my notes (hmm...maybe I should at least cast it on soon). My other sock goals for Socktoberfest are coming along well too. I am past the heel of my second travelling sock, but no pictures. They are really lovely and I hope to be done with them soon. 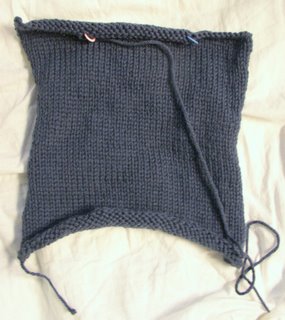 Next up on the store models is the awesome baby hoody from Debbie Bliss Special Knits. I love this hoody. I have wanted to make this hoody for some time, but there are no babies apparent on the horizon. (I have a strange feeling that at some point everyone I know will be having babies and I will be struggling to keep up, but for now there aren't any!) So, a customer has been coming into the shop and I talked her into making this for her two grandsons. It is just so cute, it made me want to knit it up even more. Luckily I now have my chance, I get to knit it up as another store model for KAH. The back is already finished. It is knitting up so fast, though that happens with it is on size 8s and made for a newborn. It is knit out of Debbie Bliss Cashmerino Aran Color #207, which is a lovely soft yarn that is machine washable. So awesome! I love her patterns and I love her yarn, so perfect project. 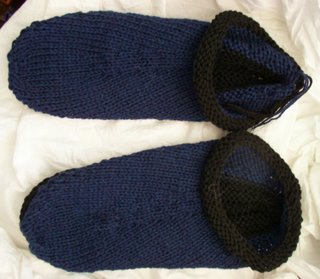 I am almost done with the slippers for my grandfather. I just have the second sole to do on the second slipper and then they can go into the wash. They are knit out of Cascade 220 and the pattern is Fibertrends Felt Clogs. This has been so fast to knit up, which has really impressed me. My grandfather wears a size 13, so making footwear for him is usually a long and arduous task. These have been a lot of fun and I have been amazed at how fast they have gone. The second one took part of an evening to get everything but the second sole done. 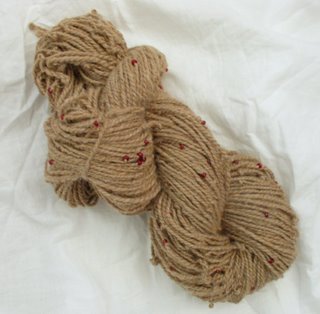 My last project that I am working on is a commission. I have been commissioned to spin beaded alpaca and knit it into a scarf and hat combo. I really like this combination of brown alpaca and red beads. It isn't something that I would put together, but sometimes it is nice to work outside of my color palette. I will keep you updated on the progress of this project as well.

In other news: Yesterday I spent all day with my mother out shopping and such for her birthday. Little known fact about me (well to the blogging world) is that my mother is an identical twin and so is my husband's father, believe me it makes me a little nervous for when I have my own kids. My mom's twin sister couldn't make it down for their birthday, so Blair and I took my mother out for a day of shopping in Portland. It was a wonderful day and I got a lot of work done on my travelling sock.
Posted by LavenderSheep at 6:13 PM

well you don't have to worry about your husband's family having twins, and you only need to "worry" about twins in your own family if they are identical twins. Such as I learned when I got pregnant & started freaking because OMG SO MANY TWINS in my family.

the socks look swell - thanks for your hard work!

Wow, you're right that the sock is lovely. I have that book, will have to go look for that pattern!