I didn't get a photo of this, but it was very delicious. To start with neither Blair nor myself are fans of cilantro, so when I found a bunch of it in our CSA box I was at a loss what to do with it. I searched around for recipes and came across one or two that looked alright. I found one for lemon cilantro chicken, but it had some bad reviews because it was too strong. So I decided to make up my own. Here it is:

Preheat oven to 375F (I actually started baking potatoes before I started, so they were finished with the chicken)
Mix together everything but the chicken in a food processor or blender.
Place the chicken breasts in a 9x9 dish
Pour lemon/cilantro mixture over the top.
Bake in the oven at for 25 minutes covered with aluminum foil
Remove foil, bake for an additional 25 minutes.

We had this with baked potatoes and roasted asparagus (which was also from our csa box). The recipe for the roasted asparagus can be found here, though I used Penzey's Florida Pepper on them instead of salt & pepper.

We ate 2 of the chicken breasts the first night. Then on the second night we made a salad out of mixed spring greens (from the csa box), leftover asparagus, leftover chicken, tomato, marinated artichoke hearts, and organic croutons. The dressing we used was the leftover lemon/cilantro mixture that cooked with the chicken. Both meals were very tasty. I could see doing this again when the weather is warmer, since it made such nice light meals.
Posted by LavenderSheep at 12:58 PM No comments:

Email ThisBlogThis!Share to TwitterShare to FacebookShare to Pinterest
Labels: recipe

The past couple of weeks have been busy for me, but not so much with bloggable stuff. I have been dyeing lots of yarn, so the shop has been filling in. I have been cooking quite a bit, even experimenting with my own recipes, which I might share in another post. I also got my garden in and got pictures. So even though it is raining today you can have a nice sunny look at my veggies: 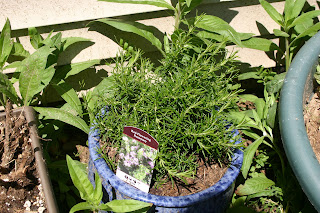 A Rosemary bush Blair picked out. It will make a nice shrub some day. 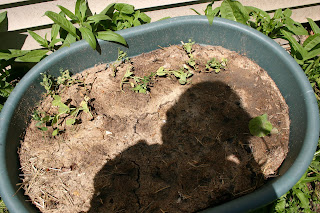 Sugar snap peas in the back, pumpkin in the front, and the bare spot I planted potatoes. 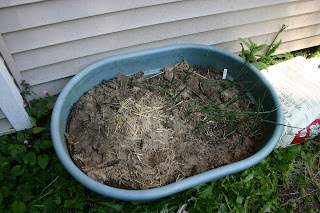 Onions on the right and I planted carrot seeds on the left. 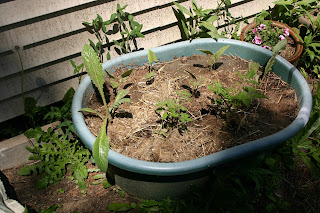 Artichokes on far left and far right. Tomatoes in front and bush beans in back.  I may end up moving some things as they get bigger. 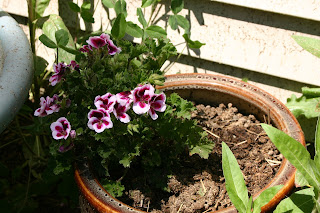 Lastly a geranium, just because I think they are pretty.

Our yard is fairly disorganized at the moment. We have hired a landscaper to do some work, so hopefully by next year I will have a much nicer place to plant everything. For now I am experimenting with what will grow well here. We get a lot of rain and we have lots of shade from big fir trees. I have asked my mother, an expert gardener, as well as some people at the local garden store about veggies that like shade and lots of water. So far I haven't received much of an answer. I am using the one sunny spot for my veggies this year, but there is still lots of rain. So I'm testing to see which veggies love lots of rain. So far the tomatoes and artichokes seem to love it and are thriving. I would love to hear suggestions for things to try, since this is my experimental year. Thanks!
Posted by LavenderSheep at 1:29 PM No comments:

Email ThisBlogThis!Share to TwitterShare to FacebookShare to Pinterest
Labels: garden

In honor of spring and the first year of the Columbia Gorge Fiber Festival, I decided to design a new colorway: Spring Fling! 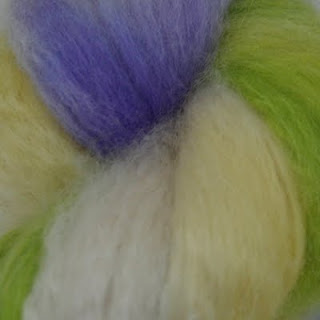 These are my favorite colors! Sure I am a purple girl all the way, but every spring I am inspired by bright lime green popping up everywhere! So I thought it was fitting to put them together with a little soft white. Above it is pictured in BFL Roving, which is now back in stock! I'm so excited to get this perennial favorite back on the shelves. 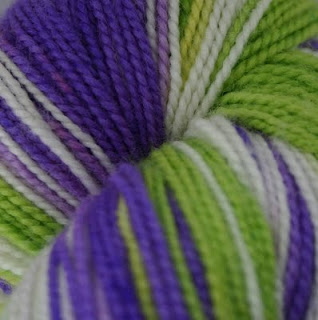 Here is Spring Fling in Superwash Sock! I simply love this colorway! (Though I guess I love everyone of my colorways, I just love color!) Somehow it makes me think of crocuses too. It just so embodies spring in so many ways! I love that we also have been getting some sun the past couple of days. Maybe I will get all of my veggies planted soon! I'll make sure to share some pics when everything is in the ground and Spring is truly here!
Posted by LavenderSheep at 3:25 PM 3 comments:

Most mornings for breakfast I have a bagel with cream cheese. For some time I have been kinda sad because I can't find cream cheese without any fillers. Even the organic variety has locust bean gum, which doesn't sound tasty at all. Well I have been listening to Animal Vegetable Miracle

and I got to the section where they talk about making homemade cheese. One of the things they mention is how soft cheeses are incredibly easy to make. I was curious enough to do a search and see just how difficult it really was. Turns out it is incredibly simple! 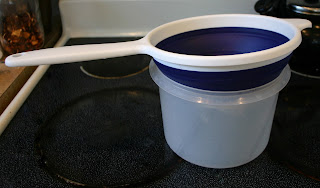 I found a recipe on Mother Earth News, where you simply use a strainer, a towel, a plastic container, and plain yogurt to make cream cheese. Above is my cream cheese making device. I just used a clean hand towel, poured in my yogurt and let it sit over night. The results are below. 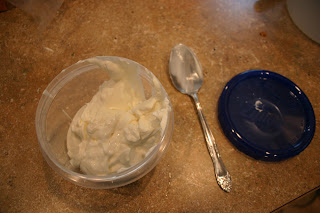 My first attempt was with yogurt from our CSA box. The yogurt to start out with was a bit runnier than I'm used to so it was no surprise the cream cheese came out softer than I was expecting. It was also fairly bland in flavor. 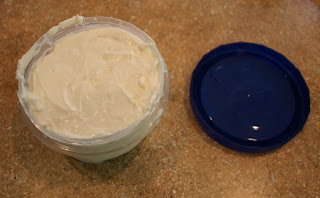 Not daunted I tried again with Nancy's Plain Lowfat Yogurt (I plan on trying whole fat yogurt next time). It turned out almost exactly like regular cream cheese! It was more sour than regular cream cheese, so I am going to have to experiment with sweetening it a bit. Maybe with maple syrup or honey for regular bagel use. As a side note, I got a huge tub of yogurt to work with. I measured out my yogurt when I made it. About 3 cups of yogurt makes 2 cups of cream cheese.

I did attempt to make my own yogurt, but it was a bit of a failure. Note: Do not use cast iron to make yogurt, it will turn out awful! I am going to try again and I'll keep you posted.

However, a big success came from making the cream cheese! I made a cheese cake for Mother's Day! It turned out to be the best cheese cake ever. Both my mother and my husband were skeptical, since neither one are fans of cheese cake, but both said it was delicious and had 2nd pieces. As you can imagine it has disappeared, so I don't have a photo. The recipe I used was one from Philadelphia and can be found here. I didn't put the strawberry preserves on top, but will probably make a fresh strawberry sauce for it the next time I make it. It was delicious without it. Also, since I can't eat graham crackers I substituted ginger snaps instead, which turned out perfect!
Posted by LavenderSheep at 9:47 AM No comments:

Email ThisBlogThis!Share to TwitterShare to FacebookShare to Pinterest
Labels: cooking

Getting my Feet back Under Me!

I think I have just about everything settled from this year's CGFF. Of course where it ends it just starts all over again, in a good way, of course. Now there are all the possibilities of next year's show. Starting with planning classes and making all the improvements learned from this year's show, so next year will go even better. 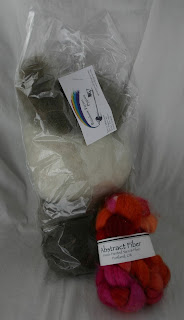 Above is a bit of fiber acquisition from the show. On the left is a set of pygora samples from Rainbow Farms Pygora. On the right is 2oz of Merino/Cashmere/Silk from Abstract Fiber. There were so many pretty things in the market. I only wish I had a bit more time to go shopping! Thankfully Black Sheep Gathering is only a little over a month away! I'm so excited because we are going to be inside this year! We will be in Building 3, booth #39. I'm not sure what that means yet or who our neighbors will be, but I'm sure looking forward to finding out!
Posted by LavenderSheep at 12:47 PM No comments:

Lots of stuff going on this month: 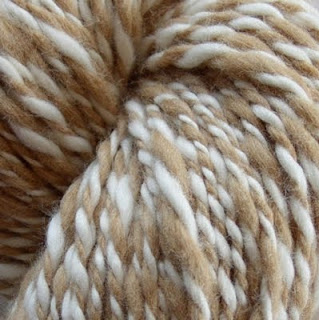 Inca Cotton has been discontinued from the mill. This makes me super sad because it was a very popular yarn. I have made sure to set aside some of it in my stash. I am so going to miss this yarn! It is now on the Sale Page and once it is gone, it's gone!

I also announced awhile back that Panda Sock has also been discontinued. It is on the sale page now as well, for a really good price.

The other thing happening this very next weekend is Maryland Sheep & Wool. Sometime I would love to attend myself, but instead I can only send yarn. Cloverhill Yarn Shop will have my yarn again this year. So, if you are planning on attending, make sure to check them out!
Posted by LavenderSheep at 1:29 PM No comments: