So, I have been doing some knitting, in between contacting instructors for the CGFF, putting together promotional items for Chrissy's CSK, and taking care of a 4 1/2 month old who is starting to teeth. Ah, life is exciting. Anyway, on to the knitting! 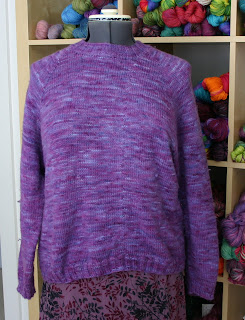 I started with recovering the yarn from this sweater. I wasn't happy with the sweater from about the time I knit it. I mistakenly knit the wrong size. Also I tried switching yarn back and forth to avoid pooling or stripes with my handpainted yarn. It didn't end up pooling, but it did end up making this line where I switched balls of yarn, right down the front of it, which drove me a little crazy. So, what's the point in owning a sweater you are never going to wear? Well, my solution is to rip it and start over with the yarn! The yarn is my Superwash Worsted in color Sugarplum Fairy. 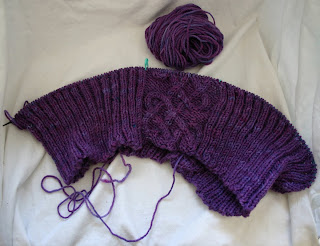 I decided I wanted to knit the new sweater by Gardiner Yarn Works, called Valencia. Which always reminds me of the song by the same name by the Decemberists. This is the back of the sweater. 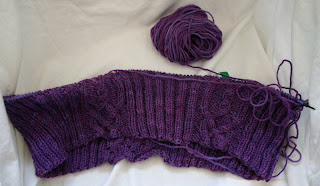 This is the front of the sweater. This is one repeat of the cable pattern. At this point I put it on very long needles and tried it on. I found it was too small, so ripped out and tried again. The trick with this sweater is it has a lot of negative ease so it will be form fitting. I somehow lied to myself and thought the second to the last size would somehow magically fit with 10+ inches of negative ease, even though the pattern very distinctly shows it being worn at 8 inches. Silly me, so I ripped this one and knit the largest size, which has about 6 inches of negative ease. I am actually past this point on the second try. This top knits up so fast and so far has been a lot of fun! I just haven't quite had time to photograph it.

Anyway, at this point I came across a couple of other people on the Gardiner Yarn Works group on Ravelry who wanted to have a knit-a-long for the sweater. So I have decided to join them since I'm already knitting it myself. Chrissy even pops in occasionally to answer questions and give advice. So if you want to knit one too, make sure to check out the group on Ravelry. I am sure I'm going to learn a lot while knitting this one!
Posted by LavenderSheep at 9:38 AM No comments:

Email ThisBlogThis!Share to TwitterShare to FacebookShare to Pinterest
Labels: valencia

I wanted to share these new Shawl Pins by Plover Designs: 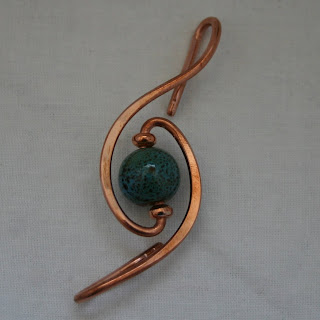 Each one has a completely unique glass bead in the center, making each one a one-of-a-kind piece of art! I had a hard time deciding, but I picked out 2 copper pins and 2 aluminum for the shop! Check them out before they are gone!
Posted by LavenderSheep at 11:48 AM 1 comment: 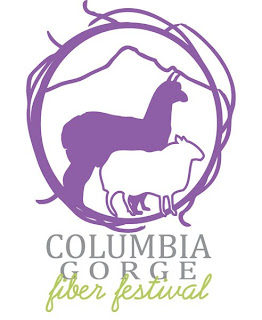 I have been very busy lately and here is why! I'v been doing a lot of the background work to put this little festival together! I am so excited to say that I now have a website up and a ravelry group! So if you are interested in being a teacher, a vendor, a student, or just adding your input, make sure to check them both out! The festival will be April 16th & 17th, 2011!
Posted by LavenderSheep at 11:48 AM No comments:

Email ThisBlogThis!Share to TwitterShare to FacebookShare to Pinterest
Labels: cgff2011

Here is the second hat I knit for my little guy: 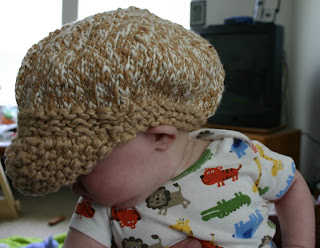 This was a really fun knit. I'm calling this the Inca Hat (rav link) because it is made from Organic Inca Cotton. The brim is Ur and the main part is Desert. The pattern is Fiber Trends Becca Joe's Cap. In the picture for the pattern it totally looks like a girls hat, including a big flower for the brim. I just knit it plain and, of course, left out the big flower. I think it is simply adorable and perfect for keeping the sun out of my baby's eyes.
Posted by LavenderSheep at 10:26 AM 1 comment:

Whale of a Hat!

Ok, I have a few minutes to breath and write a blog post! 4th of July was awesome! It's our first in our new home, so I wasn't sure how it would go. It was great! I already have plans for next year. X was awesome too. He slept right through the big booming fireworks and barely fussed during the whole day! 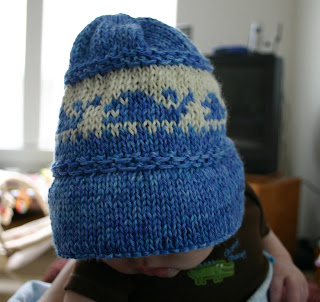 Anyway, now that the 4th is over and I have mostly recovered from Black Sheep, I can get caught up on my knitting on here. I made this hat for X (rav link) because it was near impossible to find him a sun hat. I used the leftover Tencel Sock Yarn in Summer Sky (from my Birch Scarf) doubled to make this hat. I really like this trick. If you have lots of sock yarn you can double it and substitute it for worsted weight yarn, which is perfect for a quick baby hat! The pattern is FiberTrends Whales & Sails hat. As you can see it is a bit big on him, but that means he can grow into it over the summer. I plan on making him the Sails hat for next summer. I also made him another hat I'll show you soon and finally found one at Old Navy. So he will have lots of options over the summer!
Posted by LavenderSheep at 1:29 PM No comments:

June is such a busy month, I nearly forgot about July's special. However, I did remember! No amount of post-BSG inventory, my wedding anniversary, or plans for a 4th of July bbq could stand in the way! ha ha! 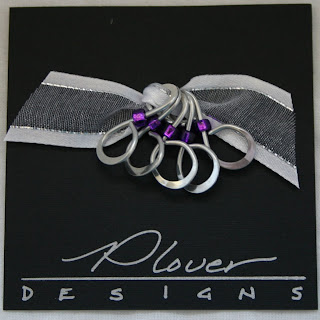 Anyway, onto July's Special! I want to introduce these wonderful New! Infinity Stitch Markers made by my good friend Donna's husband Colin Boyce of Plover Designs. Donna shared the booth with me at Black Sheep, representing both Gardiner Yarn Works and Plover Designs. She got me totally hooked on these new stitch markers. 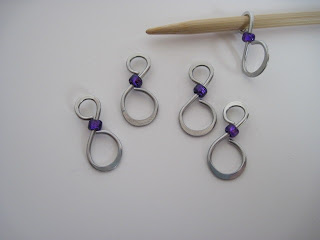 Want to know what's so special about them? Well, they are duel purpose! One side fits needles up to size 7US and the other side fits needles up to size 10US. How cool is that? I just love them! They come in a wide variety of colors. The ones I got for the shop are black, blue, clear, green, pink, purple, red, and yellow opalescent. Of course I love them all, so definitely check them out!
Posted by LavenderSheep at 8:54 AM 1 comment: