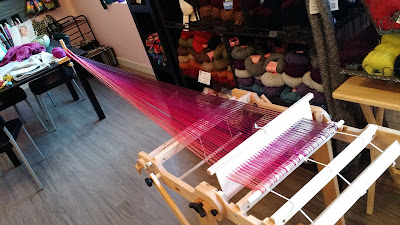 Posted by LavenderSheep at 11:30 AM No comments:

So, things have been a bit odd lately. On the one hand I don't have time for things like dyeing yarn, but on the other I have time to knit. So, I thought I would spend that extra knitting time coming up with a new project. That new project is to knit warm things for the local warming shelter. I talked to Sarah of Knot Another Hat and she was totally on board. So, I went to work knitting the perfect man hat and scarf (rav link). 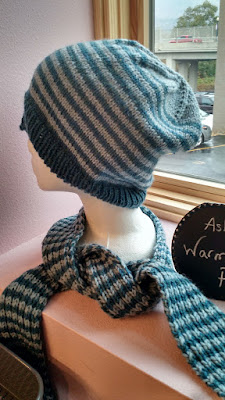 It is large enough to go over the ears or be folded up. I chose Rowan Pure Wool as the yarn, because I wanted the warmth of wool, but also machine washable. This is the hat and scarf I came up with for the project. Two balls make both hat and scarf. It is now available at Knot Another Hat for the project. The shop is collecting hats through December 22nd and is giving $3 in credit for every item donated. The idea is that the Warming Shelter is open all day on Christmas Day and they like to give out gifts to everyone who comes. A hat and scarf set is a wonderful gift to someone who doesn't have a home on Christmas. I have already knit 4 sets and I'm hoping to get one or two more done before the deadline.

In addition, if you haven't knit stripes (which are optional) or a hat or scarf before I'll be teaching classes on both at Knot Another Hat. Hat class is November 15 & 22. Scarf class is December 6th.

If you aren't local and would like to donate items you can ship them to Knot Another Hat at their new location: 11 Third Street, #103, Hood River, OR 97031.
Posted by LavenderSheep at 11:21 AM 2 comments: