While half the knitting blogosphere is writing about Rhinebeck and making me drool, my husband and I decided to go out for a bit of a drive to see the changing leaves. 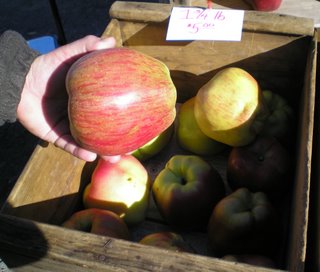 First of all we stopped by the Harvest Festival that was going on this weekend. I have gone to pretty much every one since I was a small child. Unfortunately, they wouldn't allow cameras, but I smuggled one in anyway. Though the only picture I could safely get was this one of my aunt Linda's booth, where she was selling Hanners Apples, like those used when I made applesauce. These are the really big ones that are sold to the public. They range from 1 3/4 lbs to just below 2 lbs.

On the way out I did manage to get a nice picture of Hood River. This is what my hometown looks like, well at least most of it. 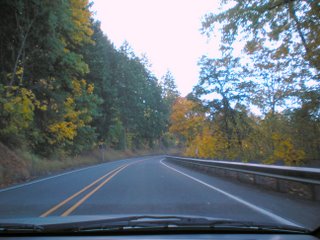 Next we went on a little drive up the valley to see the changing leaves. It is so pretty up the valley. I also love taking pictures out of the car window while driving. It's always interesting to see what turns out and what doesn't. 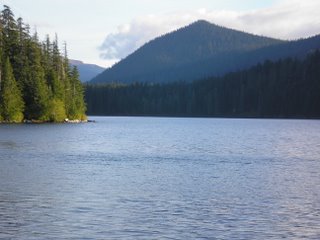 We ended up at Lost Lake, which is really nice right now. All of the camping season is over so everything is boarded up for the winter. There is absolutely nobody out there and the silence is almost overwhelming. The only thing left are the squirrels, chipmunks, and birds. We wandered around a little and took lots of pictures. It was really super cold and we weren't really dressed warm enough to hike to far. Maybe next time. 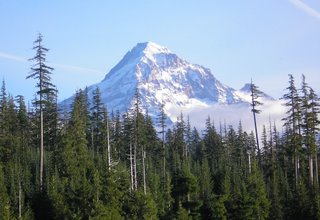 We did manage to take a few pictures of Mt. Hood. It was so crisp and clear that day that it just begged to have its picture taken. You can see that it has a fresh layer of snow on it, which also helps to explain our colder weather here and at the lake. 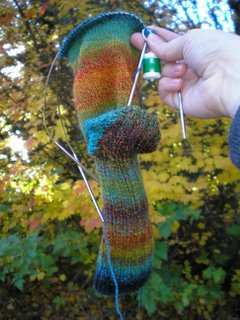 Finally, in case you thought that I had forgotten that this is indeed a knitting blog, my travelling sock. I am practically done with the travelling sock. It is so pretty. It almost blends in with the changing leaves. I just couldn't resist taking a picture of it up at the lake.

Coming Soon: One finished pair of traveling socks. A Socktoberfest update. Maybe some yarn dyeing with two new special yarns!
Posted by LavenderSheep at 10:59 AM

those traveling socks are just beautiful! Is that your colorway? I love it!