Ok, so a few other people have now posted wonderful pictures and have talked about The Knit & Crochet Show. So if you want to see some of them make sure to visit Knittin' Mom (of course!), NWKnitter, and Tiggywinkle Knits. 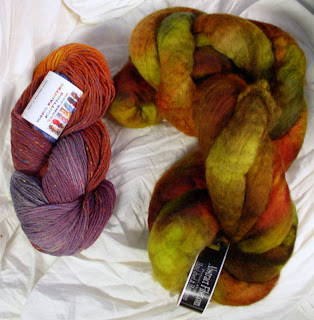 I promised to show you guys my purchases from the show and this is it! I was either very good or very tired. Altogether I spent 11 hours at the show setting up, with the last hour shopping. It was also about an hour to drive in and an hour back out. This was a big accomplishment because I usually don't drive in the "big city." Anyway, my two purchases are awesome! The one on the left is a tweed yarn by Handpainted Knitting Yarns. Have I ever mentioned that I have a weakness for tweed yarns? Well, I do! I just love them! I had a hard time picking which color I wanted and finally settled on this one. I'm not sure which one it is since it doesn't say on the label. The roving on the right was a mere fluke. I was walking past Abstract Fibers looking at their pretty stuff when they innocently asked me if I spin. I answered "Yes, I do." So they told me that I had to come into their booth where I was bombarded by pretty roving. I was really trying to hold out for OFFF, but no such luck. This really pretty BFL sucked me in and I had to buy it. They assured me that it would probably be all sold out by OFFF and that I had better buy it right then. With such salesmen they just might have sold everything right there at the show!
Posted by LavenderSheep at 9:17 AM

i had forgotten about your tweed weakness (as she scribbles it down and makes note of it0 ... that roving is really beautiful too! i'm happy to hear that your experience was a good one! good luck at offf!