So now I have my swatch and now I have to decide what I want to do. I really like the 2nd from the bottom pattern, so that is the pattern I chose. I like the small pattern and how it captures the colors. Also from the swatch I have my gauge and my stitch pattern. So now I need to pick a sweater pattern. I got out a bunch of my different pattern books and looked through them to see what sweater shapes I really like. I decided that the pattern that I liked the best for what I am doing was the Autumn Rose Pullover by Eunny Jang from the Simply Shetland 4 book (Rav link). I like the scooped neck, waist shaping, and 3/4 sleeves.

There is only one problem: gauge. See it would be super simple to find a pattern that has the same exact gauge and simply plug my own pattern into it, but who wants things simple? So I started doing some math. First off I found my size in the Autumn Rose Pullover. I looked at the CO number and divided it by the stitches/inch that the pattern called for then multiplied it by the stitches/inch that my gauge swatch told me I was actually getting. Then I adjusted the number based on the repeat in my pattern, which is 6 sts. A stitch or two won't really change the size of the pattern, so it is easier to adjust smaller pattern repeats than bigger ones. I then can do this same math for the rest of the numbers in the pattern. Adjusting where I see fit. 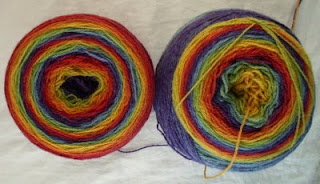 So now I have my CO number and I need to choose an edging. The last thing I did before I CO was I looked at the balls of yarn. Now if you notice the one ball goes purple, blue, green, yellow, orange red, and the other ball goes red, orange, yellow, green, blue, purple from the center out. This is bad, because it means that if both balls are pulled from the center than eventually the colors will cross and disrupt the colorwork pattern. So I could either rewind one of the balls or I could just take one strand from the outside and one from the inside. I decided to go with the 2nd option! 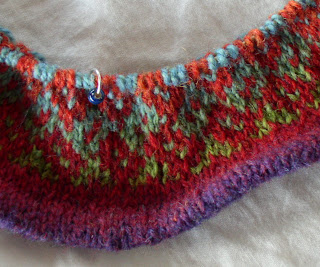 I decided to go with a rolled hem rather than ribbing because I thought it would look nicer in the Kauni yarn. One of the nice things about this yarn is that lots of people have knit up lots of different things on Ravelry, so there are plenty of ideas to be had there. For the hem I used one of the balls of yarn and a figure-8 CO over 2 circular needles. I then knit on one circular needle, joining it in the round, for about 2 inches. Then I folded the hem, bringing the needle from the CO up to the working needle. I knit through one stitch on each needle until I had knit all of the sts on the needles. This freed up one circular needle and neatly folded the hem. Now I don't have to worry about sewing it down at the end of my sweater.

Check out my previous Kauni Sweater posts here.
Posted by LavenderSheep at 10:00 AM

Email ThisBlogThis!Share to TwitterShare to FacebookShare to Pinterest
Labels: kauni